As monitor of your brand’s Facebook page have you ever wondered why a post you made two hours ago has only received 30 views on the timeline? Figuring out Facebook’s algorithm is better said than done. Here is a key strategy for you to try and get the most out of our Facebook brand page. Similar to Twitter, the lifespan of a status update is growing lesser by the day. Research shows the average lifespan on Facebook is just over two hours. For your brand page, post 5-7 times a day, every three hours. Engaging content will get more views. By reviewing what times your statuses are getting the most interaction will allow you determine what content you want to share during your “peek times.”

Mozilla Firefox browser is facing a huge setback as its latest version Firefox 16 had serious security issues. Mozilla said in a press release “At this time we have no indication that this vulnerability is currently being exploited in the wild. Firefox 16 has been temporarily removed from the current installer page and users will automatically be upgraded to the new version as soon as it becomes available.” Mozilla has been facing serious growing problems with the rising success of Google Chrome and Microsoft’s Internet Explorer.

A new survey that came out this week by the media company Beevolve suggests that woman is controlling the Twitter world. Many experts are not surprised by these findings since most of social media is dominated by woman but the new research that monitored over 38 Million tweets finds that woman have more followers and tweet more by about 15%. If you are wondering how this compares to other...

Google has been spending the better part of the last few weeks making updates to its Search algorithm. Google has made at least four updates in two weeks with the latest coming yesterday that helps users find relevant content once they click through the website. The new algorithm allows Google to look at content above the fold on websites and use that to help in search results. Users are upset that the first few search results have a little content on the homepage above the fold and they have to continue to look for the information needed. This will really effect businesses with sites that have a very clean front page website with little information on it.

General Motors announced today that they are hiring over 10,000 jobs over the next three to five years all in Computer Science. General Motors is setting up “Technology Innovation” Centers to work on new leading technology to help in their efforts. They want to work on their own “...

Google is introducing a new way of paying for your Google AdWords campaign. Google is introducing a traditional credit card for Businesses with extra AdWord benefits. The new credit card will be available for businesses in the United States and Britain. The new card has a 11.9% APR, no annual fee, minimum monthly payments and 24/7 online support. The new card is in pilot but is expected to be available officially early next year.

Microsoft has announced the pre-order of the new Windows 8 phone on October 21st. The highly anticipated smartphone has been hyped for the past 6 months and many believe this could be the best Windows smartphone in the company’s tenure. As of 2nd Quarter 2012, Microsoft only owned 3.5% of the marketshare thanks to the extremely successful devices from Android/Google and Apple. Microsoft believes strongly in their mobile future and believes this is a step in the right direction. Along with...

This week Boost welcomed Larry Bierman, CEO of Accommodation Solutions to the studio. Larry is also chair of the Longboat Key Chamber Small Business Council and he came over to discuss a new seminar series he is developing for the Chamber. The first seminar will be a breakfast for members in the hospitality industry and he asked us if we would give a presentation on website design and development. We thought it was a great idea and agreed to participate. 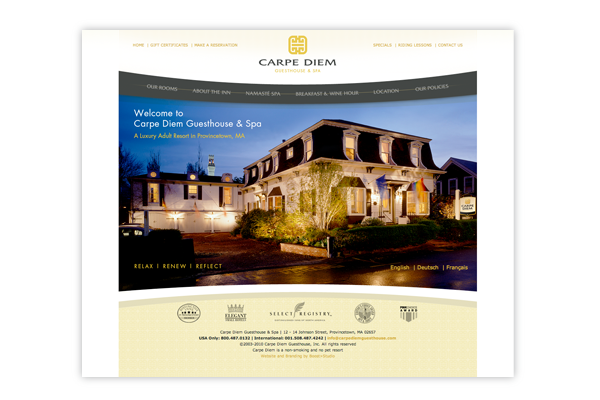 Our client, Carpe Diem Guesthouse and sister-property Namaste Spa, from Provincetown, MA would be an ideal example for the presentation as we completed a total rebranding package for them that included...